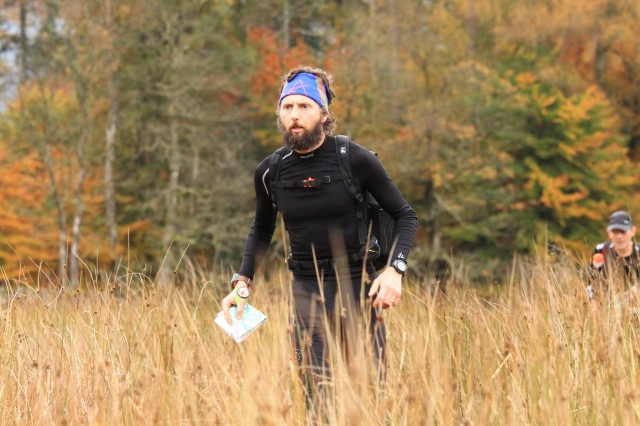 Poor preparation; no real running of late for either of us; shaking off life ‘stuff’; Jon being in considerable pain early on; a shocking nav error which cost us half an hour; poor initial route choice; and pacing the first 2 hours far too conservatively all led to an appalling 1st day performance-wise.

We remained philosophical though and had a laugh at ourselves. In spite of receiving a penalty for being 9 seconds over time after 7 hours on the go <insert F-bomb on finish line whilst being filmed by the BBC> we were more than happy to settle for 36th place on Day 1. It was The OMM after all.

The overnight camp was surprisingly comfortable and in our middle age we had afforded ourselves two additional teabags allowing us to reflect on the day with not one but two brews before slop…er…supper. A brew and some banter can do wonders. We put together a realistic damage limitation plan, hoped to not drop any lower than 50th but thought that, given our usual Day 2 performances (and a bit of luck), a top 30 finish would be achievable.

After a good rest Day 2 started with a bang in more ways than one. We were flying at the start and a route that fitted our aims seemed to present itself. Finally a bit of focus and race brains had kicked in. It was easy running for us, despite Jon’s continued pain, and whilst we thought we couldn’t maintain that all day the quick start was a mental boost. Bar a couple of Elite teams we seemed to be passing everyone.

In a split second it all went wrong. Bang was what I heard and what I thought when I turned and saw that Jon was on the deck having taken a heavy fall on a bridge crossing: directly onto the hip that had been giving so much grief. Others looked on and cringed at the sight. With the help of another competitor and myself he managed to get to his feet but didn’t look great. Then I noticed that his pack was bust. The hip belt had ripped off. I genuinely thought that only 4km into the day any plan was now out the window and a short hobble to the finish was the order of the day. However, in true self-sufficient mountain marathon, very manly (or womanly!), scout fashion a repair was duly bodged and it was time for the stoic, nay heroic, Jon to hobble on.

I’m not sure how but even with having to rein the pace in we continued to pass the crowds. It was lovely being able to stride past youngsters on the steeper, rough ascents and head into the clag for some peace and clever route finding through steep crags rather than go the long way around. And on the rare occasion when a proper steep hill descent presented itself we let rip and relished in the ‘WTF look’ from the guys we passed who thought they were going fast.

We paced the day well and Jon ran strongly for all his suffering. We chanced an extra control before our descent and run in to the last 2 available before the finish. Blasting down the forestry fire breaks in ankle deep mud rather than the tracks and roads of the previous day’s finish was a blessed relief. We trotted over the line with 5 minutes to spare. With an hour less run time available we had blasted our Day 1 points out of the water to finish 7th on Day 2 and jump from 36th to 13th overall. In the bloody OMM Long Score. And if that’s not worth a WTF I don’t know what is.